It Is Time to Sell Your Cloak 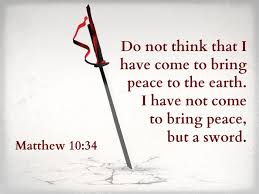 “And he said to them, “When I sent you out with no moneybag or knapsack or sandals, did you lack anything?” They said, “Nothing.” He said to them, “But now let the one who has a moneybag take it, and likewise a knapsack. And let the one who has no sword sell his cloak and buy one. For I tell you that this Scripture must be fulfilled in me: ‘And he was numbered with the transgressors.’ For what is written about me has its fulfillment.” And they said, “Look, Lord, here are two swords.” And he said to them, “It is enough.”

The Cloak and the Sword are given to us by our Lord as a pivotal point for our understanding; how we must make both a spiritual and physical change about ourselves to be properly prepared to engage in in a Just war against evil. And make no mistake, for it is warfare in which we engage; warfare, both spiritual and physical are imposed upon us, as both our duty and our test.

What is our cloak, and why must we sell it? – The “cloak”, also frequently translated as a “tunic”, was a standard outer garment in the time of Christ’s ministry on Earth.  We’ve all read the story of Bartimaeus in Mark chapter 10 – And throwing off his cloak, he sprang up and came to Jesus. And Jesus said to him, “What do you want me to do for you?” And the blind man said to him, “Rabbi, let me recover my sight.” And Jesus said to him, “Go your way; your faith has made you well.” And immediately he recovered his sight and followed Him on the way.

Bartimaeus was blind, and by consequence a beggar.  His cloak, in addition to being his primary protection against inclement weather, was a visible mark of his station in life – in effect, an ensign of his rank in society (ref. Isaiah 3:6 When a man lays hold of his brother in his father’s house, [saying], “You have a cloak, you shall be our ruler, And these ruins will be under your charge,” ).

Now, a “cloak” is also sometimes translated as a “habit” – a word still used in some religious traditions to identify the obligatory garments of religious vocation – and in that regard it also pertains; because our “habits” do indeed mark us to a particular station in life.  We must give up our old “habits” – our assumptions, expectations, and behaviors – before we may receive new ones through Grace, just as Bartimaeus cast off his old beggar’s habit before coming to Christ to receive healing. Bartimaeus’s casting off his beggar’s cloak was the outward ensign of his faith; his sincere desire to receive Grace from his Lord, his submission and willingness to be changed by Him.

As with Bartimaeus, we are often called to give up our familiar position in society, to make changes which may seem drastic and uncomfortable, and to take risks along the path our Lord has chosen for us, with no knowledge of the outcome.

Bartimaeus is thus set before us as a milestone of faith; a standard by which we will each be measured in our response to receiving Grace, where it says plainly, that “Bartimaeus immediately…followed Him along the way.”  Jesus did not command (or request) that Bartimaeus follow Him – in fact Jesus said, “go your way” –  but having received Grace from his Lord, Bartimaeus knew what was required of him, and so he followed Jesus without question.

What then, is the sword, and how do we buy (obtain) one?

Jesus said, “Do not think that I came to send peace upon earth: I came not to send peace, but the sword.” -Matt 10:34

The sword is also a symbol of station in society, even one of authority.  As Christ spoke and acted with authority, to the amazement of the scribes and Pharisees who were guilty of dissembling and unbelief, so has He given us a sword, and called us forth as a Church Militant to serve His authority, as a deaconate force for the delivering of Justice in the world.  The question is whether we will accept the sword which He has placed before us, the one He has called us to lift up to His glory.

Ezekiel reveals to us what that sword is, which the Son of Man, our Lord Jesus brings –

The word of the Lord came to me: “Son of man, set your face against Jerusalem and preach against the sanctuary. Prophesy against the land of Israel and say to her: ‘This is what the Lord says: I am against you. I will draw my sword from its sheath and cut off from you both the righteous and the wicked. Because I am going to cut off the righteous and the wicked, my sword will be unsheathed against everyone from south to north. Then all people will know that I the Lord have drawn my sword from its sheath; it will not return again.’

“Therefore groan, son of man! Groan before them with broken heart and bitter grief. And when they ask you, ‘Why are you groaning?’ you shall say, ‘Because of the news (Gospel) that is coming. Every heart will melt with fear and every hand go limp; every spirit will become faint and every leg will be wet with urine.’ It is coming! It will surely take place, declares the Sovereign Lord.”

The word of the Lord came to me: “Son of man, prophesy and say, ‘This is what the Lord says:
“ ‘A sword, a sword, sharpened and polished—
sharpened for the slaughter, polished to flash like lightning!
…
(I encourage you to read the entire Book of Ezekiel, and to recognize the times in which we find ourselves, how they mirror the days of Ezekiel)

And the cause of this Judgment, this sword which Christ brings, is clearly explained –

Therefore this is what the Sovereign Lord says: ‘Because you people have brought to mind your guilt by your open rebellion, revealing your sins in all that you do—because you have done this, you will be taken captive.

‘You profane and wicked prince of Israel, whose day has come, whose time of punishment has reached its climax, this is what the Sovereign Lord says: Take off the turban, remove the crown. It will not be as it was: The lowly will be exalted and the exalted will be brought low. A ruin! A ruin! I will make it a ruin! The crown will not be restored until He to whom it rightfully belongs shall come; to him I will give it.’

There are only two ends of a sword; the handle, and the blade.  Those who do not grasp the handle shall face the blade.  This is why Jesus tells us to buy (obtain) the sword…  HIS Sword – to be on the right side of Judgment in the day thereof, rather than to face the Judgment unprepared.  But the day of Judgment shall be a horror, even to those on the Right side of it, for we shall be called to wield the sword against His enemies, as Ezekiel reveals so plainly.

And this brings us to the spiritual side of buying a sword – we must be prepared to face that day, and to do what we are called to as His soldiers, without rancor, without usurping His Judgment, and without hesitation or reservation.  Judgment must pass through us, yet we must not grasp it for our own, lest we too be destroyed by it.

This, then, is the ultimate test of our faith – to do every last thing which is required of us, immediately and without hesitation; and to avoid engaging in any personal judgment or ‘second guessing’ as we do so.

…but he who stands firm to the end, shall be saved.

It is true that not every believer will be called to wield the sword physically.  When Jesus commanded his Disciples to bring arms to the garden of Gethsemane they said, “Lord, behold, here are two swords.” And he said unto them, “It is enough.” I.E. two swords were sufficient among those who went to the garden with Jesus.

Let’s estimate that twenty went with Jesus to the garden – I am not picking theological nits here; perhaps it was less, or perhaps more, but it’s an easy number to work with, and as arguably correct as any  – this would suggest that 1 out of 10 Men who profess Christ should always be armed and ready, for His people to have “enough” force of arms.  (If you insist on a stringent interpretation, then it would be 2 swords for every 11 men [12 disciples – Judas])

And what about the other 9 out of 10 [or 11] men? And the women, elderly, and children?  All those who are confirmed (adults) in the Church are obliged to be spiritually ready to serve in whatever capacity is required of them – not all will be required to physically fight, but all will be required to serve, and all will face danger and hardship in the service of our Lord.

For the sake of illustration, let’s say that a hurricane or an earth-quake struck your community; while there would be an immediate need for strong men to respond with shovels and chain saws to rescue survivors, there would be many more hands needed to care for the sick and wounded, to prepare food and carry it to those doing other jobs, to serve as messengers, etc.   All of those who serve Him in such capacities are part of His body, and strengthen His arm which bears the sword.  But none of this guarantees that you won’t have to fight, either – our spiritual readiness will be tested, of that I am certain.

All of this is of growing import, as we witness the prophesies of Isaiah and Ezekiel all around us, with the same dire warnings in play, that the Judgment comes swiftly against those who flaunt their abominations openly before God.  It is, indeed, time to sell your cloak and take up the sword.

Thank you for the Bible refresher lesson to put things in their proper perspective !