Japan, Russia agree to cooperate on security as China rises 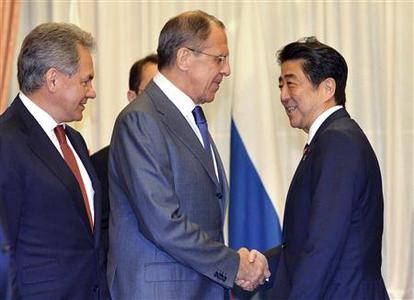 Japan and Russia held their first joint defense and foreign ministers’ meeting on Saturday and agreed to boost security cooperation in the Asia-Pacific as they both warily watch neighboring China’s rising influence.

Japan and Russia have never signed a treaty to mark the end of World War Two because of a territorial dispute but they are moving to deepen ties despite that, and despite Russian concern about Japan’s role in a U.S. missile defense program.

The foreign ministers of both countries said the meeting helped build trust.

“To boost cooperation in the field of security, and not just in the field of economic and people exchanges, means that we are improving overall Japan-Russia ties,” Japanese Foreign Minister Fumio Kishida told a news conference.

This entry was posted in Editorial, Education and tagged Japan, Russia. Bookmark the permalink.