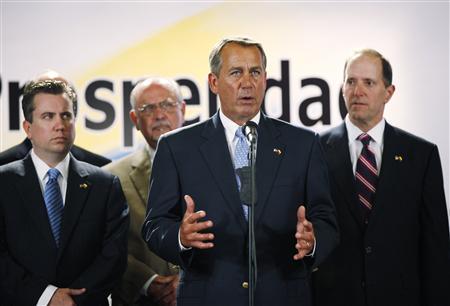 The quote of the day from one House Republican leader aide:

“I think Boehner will seek a more accommodating approach to get a good percentage of Democrats to vote for it – even if it costs him a lot of House Republican freshmen.”

John Boehner will appease Democrats once again at the expense of the “TEA Party” aligned representatives in order to “spare fellow Republicans a second embarrassing defeat”. Once again we see the ends justifying the means which in this case is to put a Republican in the White House in 2013.

Did we elect representatives to the US House to run a political campaign or the nation? If you are thinking that they should be doing both tasks, I have a question. How’s that working out for us? We have no budget, the freshman representatives that were elected to put us back on a fiscally responsible track are marginalized and John Boehner is submissive to the president.

Although I understand the importance for this election, I also do not believe that America has the luxury of waiting another 12 months for a Republican president based on economic and world events. Since Boehner’s debt ceiling’s appeasement deal last August, the president has spent another $2.3 trillion (including the latest $1.2 trillion) without Congressional approval. Mr. Boehner gave him that authority to use it as another election point this year. Yes, Congress can vote down the latest $1.2 trillion request but they knew when the deal was made that they do not have the necessary votes to override Obama’s veto.

Tea Party may get rebuffed in tax cut showdown

House Speaker John Boehner, hoping to spare fellow Republicans a second embarrassing defeat over payroll tax cuts, is prepared to navigate around rebellious Tea Party-aligned lawmakers to get a deal, according to congressional aides.

Republicans in the House of Representatives got a public drubbing from critics within and outside the party in December for initially refusing to approve a Senate plan to extend the tax break for 160 million Americans through February.

The party of lower taxes was left on the defensive, countering a barrage of criticism that its unwillingness to compromise threatened an effective tax hike on workers, potentially damaging the fragile economic recovery.

Now, with Democratic and Republican negotiators preparing for a new round of talks in the coming days to extend the payroll tax cut for the rest of the year, Republican leaders are anxious to move quickly to get a deal, aides said.

House Speaker John Boehner is a Republican. Intransigent extremists within the Tea Party caucus are Republican in name only. The Constitution Party best represents the views of most Tea Partiers.

Biblical economist Gary North, who is a Christian Reconstructionist/Dominionist, calls himself “The TEA Party economist.” See the CR/Dominionists’ ends and means in the article “The Despoiling of America,” Katherine Yurica, February 11, 2004. http://www.yuricareport.com/Dominionism/TheDespoilingOfAmerica.htm

In his April 10, 2010 article “Hip-Pocket Politics: How To Become a Tack,” North describes to the Tea Party the coercive tactics to use to control the votes of Republican elected officials. http://www.lewrockwell.com/north/north833.html

“Journalist Frederick Clarkson, who has written extensively on the subject of Dominionism, warned in 1994 that Dominionism ‘seeks to replace democracy with a theocratic elite that would govern by imposing their interpretation of “Biblical Law.”‘ He described the ulterior motive of Dominionism is to eliminate “…labor unions, civil rights laws, and public schools.”…”Their agenda to undermine all government social programs that assist the poor, the sick, and the elderly is ingeniously disguised under false labels that confuse voters.” They maintain the necessity of Laissez-faire economics, requiring that people ‘look to God and not to government for help.'”… See again The Despoiling of America,” by Yurika. http://www.yuricareport.com/Dominionism/TheDespoilingOfAmerica.htm

Dear “Whistling in the Dark” … The issue we must address is “Good” vs “Evil”.

David attempted to raise this many, many times. The most recent was:

Can you refute the logic ?

The“R”epublican party relinquishes its claim to support “Good” every time it agrees to compromise with the evil of collectivism embraced by the “D”emocrat party.

“Run of the mill Republicans” (aka RINOs) and “moderate Democrats” are cults of persons without consistent philosophy who are deluded into support of party in order to achieve comfort … give us power and we will make you / ourselves safe.

We whom you disparage do not undermine true charity or confuse voters with false appearance.

I embrace the consistent philosophy of the Tea Party and have no interest in seeing “democracy” replace our representative government, founded as a Constitutional Republic.

I think you are blogging up the wrong tree …

I don’t think Republicanism can coexist with the TEA Party and by extension, the Constitution.

1. Where is our national budget?
2. Why is the lack of a national budget not a campaign issue for the Republican primary candidates?
3. Why did the Republican party support the NDAA in violation of the 1st and 5th amendments?
4. Why did the Republican party cede power to Obama concerning raising the debt ceiling by an additional $2.3 trillion in the August debt ceiling compromise in violation of the balance of powers?
5. If John Boehner feels it is more important to win the election than do the work Congress was elected to do under their oath of office, then he has put party over duty outlined in the Constitution.

Boehner is a drunk, period. He sold out those that voted for change.