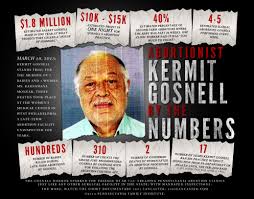 A jury has found abortion Dr. Kermit Gosnell guilty of three counts of first degree murder after deliberating for 10 days on the case. Prosecutors are expected to now seek the death penalty for Gosnell.

Prosecutors contended that the 72 year old killed four premature babies after they were born alive in his Philadelphia clinic by severing their spinal cords. He was acquitted of one of those charges, and convicted in three. Gosnell was also found guilty in the accidental death of a patient, who died after receiving an abortion and a mix of sedatives and painkillers at his clinic.

A 2010 federal investigation described his West Philadelphia clinic as an unsanitary “house of horrors” that primarily served low income women seeking late-term abortions. The nearly 300-page grand jury report said remains of fetuses were stored in freezers and that instruments used in abortions were contaminated with sexually transmitted diseases.

This entry was posted in Editorial and tagged Abortion, Gosnell, Guilty. Bookmark the permalink.