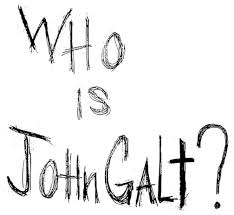 Economist Karl Denninger has gone John Galt.  The Market Ticker founder has released a statement that he is shutting down active market reports and updates at The Market Ticker, as he no longer wishes to actively fund the abuses of our fascist government and banking sector, and says in two words: “I’m done.”

I refuse to continue to silently accede to, and actively fund through my drive to acquire that measured in and rewarded by “wealth”, the rampant theft and fraud that has and continues to take place in the economic sector, especially in the banking and health care areas of our economy.  None of this could ever exist except through the insertion of the guns of government up the noses of the American people.
I can no longer live with being one of the better sources of funding for these abuses.  This decision did not come lightly, easily or quickly.  But I’m convinced it’s the right choice as things stand today.
In short, if you want it in two words, it’s this: I’m done.

This entry was posted in Editorial, Financial and tagged John Galt, Karl Denninger. Bookmark the permalink.