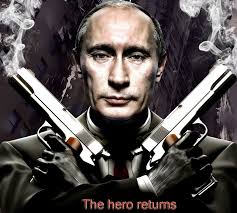 While most news coming out of Ukraine regarding the ongoing civil war are merely propaganda designed to make Russia look bad, and hence irrelevant and vice versa from Russia of course – the only news that matters re: Ukraine is:

i) what happens with gas deliveries to Europe via Ukraine and

ii) the fate of the South Stream pipeline; the rest is mostly noise

It is perhaps a testament to how the global media will observe Russia’s response to the latest US sanctions, and hardly improve risk appetite, that as Reuters reports a Russian jet shot down a Ukrainian SU-25 fighter plane that was on military operations over the east of Ukraine.

While we have yet to receive the official Kremlin denial of this major escalation in hostilities between the two countries, and one which would otherwise be grounds for war by Ukraine and thus essentially denies the report (since Ukraine did not declare war on Russia for rather obvious reasons), here are the alleged details:

It was the strongest Ukrainian allegation to date of direct Russian military involvement in the conflict. Russia’s defence ministry declined to comment on the report.

The plane was brought down on Wednesday night by a rocket strike and the pilot safely ejected, Andriy Lysenko, a spokesman for Ukraine’s national Defence and Security Council, told journalists.

This entry was posted in Editorial and tagged Ukraine. Bookmark the permalink.