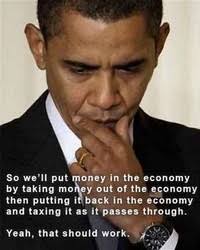 The federal government and the media have deceived the people about the true state of our economy. If, has now been replaced by “when” will the economy collapse. What are the signs that the collapse is imminent? We have to look at the facts and also what is not being reported in order to deceive us.

Here are some facts:

If the demand for any product is going down, why is the price going up?

3. While the government inflates the stock market, the price of gold and silver is openly manipulated by large banks. The government dismisses investors’ lawsuits in yet another example that we are no longer a nation under the rule of law:

In a decision made public on Monday, Patterson said that while the investors showed that JP Morgan had the ability to influence prices, a fact the bank did not dispute, they failed to show that the bank “intended to cause artificial prices to exist” and acted accordingly.

4. Food stamp spending has more than doubled under this administration:

47 million people received food stamps last year. Throw in another 14.4 million on the new welfare (disability) and 25.5 million government employees and there is only one conclusion: voting is no longer a viable solution. Which is a possible reason why the Republican party is supporting amnesty.

5. There is no fiscal accountability in DC. We have no budget and the “debt ceiling” has become irrelevant as shown below. The government has breached the debt ceiling and instead of addressing the issue, it is ignored. No media coverage. No Congressional inquiries. No solutions.

If people understood the reality outlined above, there would be bank runs across the country. And no amount of government intervention would be able to prevent an economic collapse at that point. The FDIC has a balance of $35.7 billion. The top 5 US banks held 95.7%, or $221 trillion of the entire US derivative universe as of June 30, 2011. This is 0.02% of the outstanding exposure that these five banks are liable for when the collapse occurs. Let’s put this into a Cypriot perspective: a bank bail-in. For every $250,000 in deposits, you would received $40.

This is not a hypothetical exercise. The dollar will collapse and any wealth that has its foundation in federal reserve notes will become worthless once the bank runs start. And the same principles apply to the stock market.

This entry was posted in Editorial, Financial and tagged bank runs, Unemployment. Bookmark the permalink.