MATTHEW BRACKEN: STICK TO YOUR GUNS! 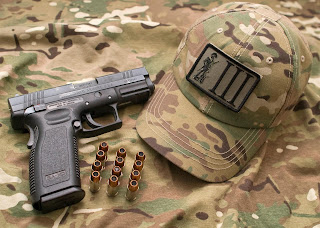 Stick to your guns, no matter what.

If they come to take them by force, they have declared war on the Constitution, and on you. At that point, war is joined, just as it was on another big gun confiscation raid on April 19, 1775. If it was legal in 2012, it’s legal in 2013 and it will be forever. If they say otherwise, they are liars and traitors and oath breakers and domestic enemies.

If you are disarmed and led away in cuffs, are you so sure you’ll be bailed out? And not taken to a “new place” with “new rules”?

Every survivor of every genocide says the same: when they come to take your guns, shoot them. Make them work for it, and THEIR system is overwhelmed, because they don’t have 20 million FLEAs to do armed battles all over the country, instead of nice polite arrest raids like those that that Glenn “Ghandi” Beck envisions, with the NRA lawyers throwing your bail and suing the pants off the .gov.

It’s like the Solzhenitsyn paragraph “how we burned later in the camps” because they didn’t resist the GRU/KGB in the lobbies and stairwells with axes and knives.

Entire divisions of Russian troops hiked home from WWI in 1917/18, carrying their rifles and swords and other sidearms. Very early on, Lenin decreed that public safety demanded they all be turned in, under penalty of death. And so they were disarmed, but not the Party members! Then came the purges, the Great Terror, the gulags, and tens of millions of dead. So well preserved was the fiction, that most Russians, when arrested, thought, “Gee, there must be some mistake. I haven’t done anything wrong. They’ll let me go in a few hours.” (Wrong answer.)

If you give up your arms, you are placing your entire trust in the permanent future benevolence of the U.S. govt. This trust is invariably fatal. The German gun registration laws and limits on “military” weapons (then, Mausers etc) were put in in the 1920s Weimar Republic,years before Hitler.

They were all common sense and reasonable gun control laws, I’m sure today’s liberals would agree 100%. Then Hitler comes along, and uses the list to first disarm, and then ghetto-ize or “deport” and finally gas the Jews and others, killing millions.

Genocide, using the “common sense” gun registration lists to locate their most dangerous enemies. But first, they just come to pick up the weapons. “No trouble, folks!” They come for the mass arrests later, when the people are disarmed.

Millions of Polish Jews were rounded up this way, when the German police only needed a 1-10 ratio to their victims. 100 German military police, 4-fs in their forties, bottom of the barrel conscripts, would round up and murder a town of a thousand. Force them to gather, then march groups at gunpoint into the woods for execution. A 1-10 ratio means the killer police are not worried at all. The victims were all disarmed. If they were armed, every village would require a major military effort.

I’m sorry, I do NOT trust that our .gov won’t turn as mean as the old USSR to its “class enemies,” the MSM’s duly appointed scapegoats, us white racist tea-party terrorists, the bitter clingers.

Folks, they perceive that we are reactionary forces not only standing in the way of social progress and liberal utopia, we are actively blocking it. That makes us pure Evil, since their plan for utopia is pure Good. That means they will come to feel totally justified in seeking a “final solution to the bitter clinger question.”

And once their mortal enemies (that’s us) are disarmed and helpless…the temptation grows to simply do away with them. Bill Ayers thought they would need to murder 10% of the population to achieve their utopia.

As it was with the Turkish Armenians, German Jews, Russian Kulaks, Chinese, Ugandans, Guatemalans, Cambodians, Cubans, Rwandans, and on and on, history’s lesson is clear:

STICK TO YOUR GUNS!

I listened a local radio station yesterday and suddenly the grease spot Beck came on (I never listen to this pos). I could not believe my ears when he suggested that instead of shooting back and defending my home, I ought to surrender -- and this is the way to win the war against the Marxists. It made me puke.

Ain’t gonna happen. Their final solution is going to turn into unintended consequences.

I did not hear Glenn Beck state this. However, sometimes you have to lose a battle to win the war. Only you can determine whether martyrdom is your course of action to win. I am not suggesting surrender. I am convinced that losing this war will have intended consequences of the federal government: a boot on your children’s throat.

Only 3% of the colonial population fought the American Revolution.