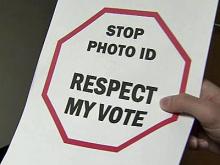 The lawsuit, which was filed Monday afternoon, is the latest effort by the Obama administration to fight back against a U.S. Supreme Court decision that struck down the most powerful part of the landmark Voting Rights Act and freed Southern states from strict federal oversight of their elections.

“I believe the federal government action is an overreach and without merit,” McCrory said at a news conference. “I think it’s obviously influenced by national politics since the Justice Department ignores similar laws in other (Democratic-leaning) blue states.”

Nothing at all wrong with providing a valid ID for voting. Voting is serious and voter fraud is IMHO tantamount to treason as it subverts our political processes.

If North Carolina can get rid of its State Income Tax that state will become very appealing!

so I am most likely totally uninformed on all of this because I no longer vote. if voting actually mattered it would be illegal. anyhow… didnt we decide to issue drivers licenses to illegals not that long ago? if so what the hell is the issue with them obtaining id to vote? seems like yet another frivolous waste of our money. it is amazing to me how much this country has changed. we bend over backwards for people who don follow the rules and kick the legal hard working guy in the balls.