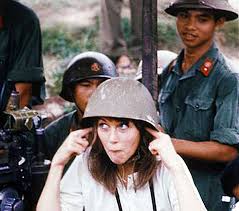 In their latest interview with Michelle Obama, People magazine asked if there were role models the First Lady looked at to think “When I’m 70 or 80, I want to look and live like her?”

“I just went to see Cicely Tyson on Broadway. She is in her 80s [just turned 80 in December] and did a two-hour play with stamina and passion. I told her ‘I want to be you when I grow up!'” And then she added: “There’s Jane Fonda, a beautiful, engaged, politically savvy, sharp woman.”

This entry was posted in Domestic Enemies, Editorial and tagged Michelle Obama. Bookmark the permalink.