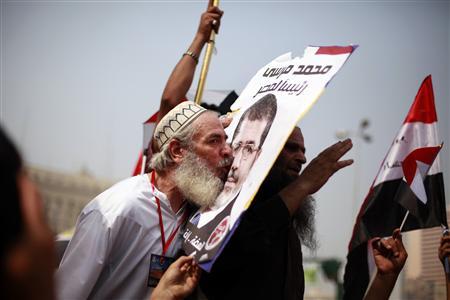 A supporter of the Muslim Brotherhood’s presidential candidate Mohamed Morsy kisses a picture of him during a celebration at Tahrir square in Cairo June 18, 2012. The Muslim Brotherhood’s Mohamed Morsy said on Monday after his group declared him winner in a presidential race that he would be a president for all Egyptians and said he would not ”seek revenge or settle scores.” Credit: Reuters/Suhaib Salem

An election committee source told Reuters that Islamist Mohamed Morsy, a U.S.-educated engineer, was comfortably ahead of former air force general Ahmed Shafik with most of the votes tallied. But the count, which would make him the first civilian leader in 60 years, had yet to be officially finalized.

In any event, however, the new president will be subordinate for some time at least to the military council which last year pushed fellow officer Mubarak aside to appease street protests.

In the latest twist on Egypt’s tortuous path from revolution to democracy, the Supreme Council of the Armed Forces (SCAF) issued a decree as two days of voting ended on Sunday which set strict limits on the powers of head of state. On the eve of the election, it had already dissolved the Islamist-led parliament.

What’s next for Greece?

A pro-bailout party in Greece won the most votes in Sunday’s parliamentary election, which could ease any immediateconcerns about the nation’s future participation in the euro area.

But it remains to be seen if the party, New Democracy, can form a viable government supporting the bailout given the deep anti-austerity sentiment in Greece.

Meanwhile, the clock is ticking on some key deadlines.

The government must identify additional budget cuts by the end of June to comply with the terms of its bailout program. If it fails to do so, analysts say the European Central Bank could cut off funding to Greek banks, which have already been drained of cash as deposits flee the country.

In addition, Greece is facing a €3.9 billion bond redemption in August.

The nation’s economy is in deep decline, and analysts say Athens is in danger of running out of the money it needs to pay for basic necessities, such as fuel and medical supplies.

Under the Greek constitution, New Democracy, as the top vote-getter, will have three days to negotiate a coalition government. If it fails, Syriza would be given the same three-day deadline, followed by Pasok. If all three parties fail, as they did in May, the Greek president will attempt to broker a compromise.

Analysts say New Democracy could cobble together a government with Pasok and another party called Democratic Left. But any coalition formed under these circumstances would have a weak mandate and could face resistance in parliament.

A resounding Socialist victory in weekend parliamentary elections will allow President Francois Hollande to press ahead with reforms to tame France’s deficit and promote economic growth in Europe, a senior minister said on Monday.

The Socialists, who won a comfortable majority in Sunday’s parliamentary elections, will use a special session of parliament next month to axe tax breaks and increase taxes for large corporations, particularly banks and energy companies.

The measures are part of Hollande’s twin track drive to balance France’s budget by 2017 and persuade Europe’s paymaster Germany to back his call for a stimulus package of more than $100 billion to boost growth.

Investors who oversee more than $3.2 trillion expect Spain to become the fourth euro member to need external funding as borrowing costs surge to levels too punitive for the nation to finance its needs on the capital markets.

Spanish debt has slumped, pushing the 10-year yield today to a euro-era record of 7.14 percent, as investors at Fidelity Investments, Frankfurt Trust and Principal Investment Management say the nation may lose market access. The bonds are the worst performers among 26 developed markets since June 9, when Economy Minister Luis de Guindos said he would request as much as 100 billion euros ($127 billion) of emergency loans from the euro area to shore up a Spanish banking system hobbled by bad assets.

“Yields are at levels at which Spain can’t really afford to finance itself for more than a few months,” said Craig Veysey, head of fixed income at Principal Investment Management in London, part of Sanlam Group, which manages $72 billion. “The banking bailout doesn’t really help Spain’s credibility in the market and the probability is rising that it will be asking for a bailout for the sovereign.” Veysey said he doesn’t own Spanish government bonds and has no plans to purchase them.

Speaking at a news conference on Friday afternoon, Italian Prime Minister Mario Monti said the government’s so-called “growth decree” included measures to dispose of property assets, including military sites, and reduce “the structure of the state”.

By the end of the year the Economy Ministry will complete the sale of Sace, an insurer of Italian companies’ activities abroad, Simest, a service provider to Italian companies operating outside the country, and Fintecna, a holding company.

Concerns have grown this week that Italy could be the next country to succumb to a debt crisis that has spread from Greece, Ireland and Portugal to Spain.

A €100bn bailout for the Spanish financial sector last weekend was intended to calm markets and push down borrowing costs that have jumped above 7pc for Spain and 6pc for Italy – levels that are considered unaffordable in the long term.

Mr Monti is also under pressure to reduce Italy’s huge stock of debt, equal to more than 120pc of output.