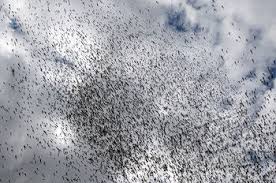 The hurricanes are now being blamed for “monster mosquito swarms” in North Carolina. Incredibly, these swarms are being blamed on Congress as part of the never-ending funding of the government is debated.

Some areas of North Carolina, for example, have let epic post-hurricane swarms of mosquitos overrun their towns, worried that spraying programs won’t be reimbursed by FEMA.

Do we really believe either political party will fix Washington, DC? Have we really lost all touch with our founding principles if we have to rely on politicians to oversee our bugs?

This entry was posted in Editorial and tagged FEMA, Mosquito, NC Renegade, swarms. Bookmark the permalink.