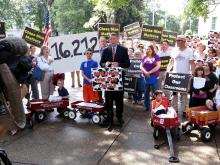 North Carolina Republicans are pushing back harder against weekly protests as another group of demonstrators aligned with the state NAACP face police charges.

Many in the group of 84 people arrested Monday at the state legislature were clergy who say the Republican-controlled General Assembly is making policies that hurt the poor and children.

“Biblically, we speak of a time when we care for the least of these, that we care for those who cannot care from themselves,” said Rev. Clarence Shuford, of St. Phillip AME Zion in Greensboro.

The arrests bring the total over six rounds of near-weekly demonstrations to more than 350. The National Association for the Advancement of Colored People and a growing number of left-leaning groups are lashing out at a host of GOP policies ranging from education to voting rights.

Looks like Bob “who are you” Etheridge has finally found a group that he can relate to morally.