NC Board of Elections Involved in Illegal Voting Practices 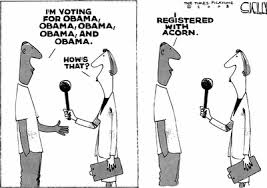 Ever since Obama’s 2008 election, grassroots conservatives in North Carolina have painstakingly reviewed and documented voter irregularities to see if fraud was taking place. Many discrepancies are still being found, but the nonprofit Civitas Institute has proof through a series of public records requests that the State Board of Elections worked with the Obama campaign to violate election laws.

The Civitas Institute has documented how SBE [State Board of Elections] bureaucrats conspired with a private company, working for the Obama campaign to facilitate a form of online voter registration for the 2012 General Election – in violation of state law. It’s a classic example of how bureaucrats ignore the democratic process and hijack an agency for partisan purposes.

Yet the SBE staff set in motion a scheme that in the last two months of the election resulted in more than 11,000 people being allowed to register online. Civitas has confirmed this by a public records request to all 100 counties and is still compiling the total number of registrations as counties comply with the request. Thus far, 68 percent of the registrations we have received were Democratic voters, 10 percent were Republican voters and 21 percent from unaffiliated voters.

Don Wright, SBE General Counsel, played word games when answering inquires about the Obama campaign’s own re-election site Gottaregister.com, which utilized the technology that SBE staff approved.  Wright repeatedly denied that the SBE allowed online voter registration, insisting that it was “web-based voter registration” instead, as if there could be a “web-based” process that wasn’t online.

[…] NC Board of Elections Involved in Illegal Voting Practices […]

[…] NC Board of Elections Involved in Illegal Voting Practices (ncrenegade.com) […]