New US Stealth Fighters Now at Iran’s Back Door 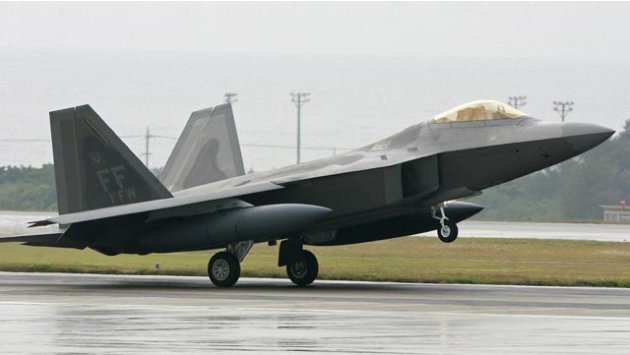 America’s most sophisticated stealth jet fighters have been quietly deployed to an allied base less than 200 miles from Iran’s mainland, according to an industry report, but the Air Force adamantly denied the jets’ presence is a threat to the Middle East nation.

Multiple stealth F-22 Raptors, which have never been combat-tested, are in hangars at the United Arab Emirates’ Al Dafra Air Base, just a short hop over the Persian Gulf from Iran’s southern border, the trade publication Aviation Week reported.

Air Force spokesperson Lt. Col. John Dorrian would not confirm the exact location of the F-22s, but told ABC News they had been deployed to a base in Southwest Asia — a region that includes the UAE. Dorrian also stressed that the F-22s were simply taking part in a scheduled deployment and are “not a threat to Iran.”

The F-22 has only been in the UAE once before for training missions in 2009 with “coalition partners.”

Dorrian declined to say what the Raptors’ mission was in the region this time around or how many planes had been deployed, citing operational security. However, Dorrian said that because of the F-22’s next-generation capabilities, any number of planes deployed to the region is “significant.”

Though the F-22 has been officially combat operational since December 2005, no planes from the Air Force fleet — which are made by defense contracting giant Lockheed Martin and cost an estimated $79 billion — have seen combat. The plane was not used in Iraq, Afghanistan or in the U.S.-led no-fly mission over Libya. The Air Force has said the sophisticated jets simply haven’t been needed yet.

But Jeff Babione, Lockheed Martin’s vice president for the F-22 program, told ABC News last year that the plane was “absolutely” suited for taking on more sophisticated adversaries and could be used in deep penetration strike missions in well-defended combat zones inside places like North Korea or Iran.