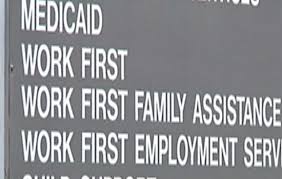 North Carolina has become the first state to cut off welfare benefits to poor residents in the wake of the partial federal government shutdown, ordering a halt to processing November applications until a deal is reached to end the federal standstill.

More than 20,000 people – most of them children – receive monthly benefits aimed at helping them buy food and other basic supplies through North Carolina’s welfare program, called Work First, which is fully funded by the federal government. Recipients must reapply each month.

The state’s Department of Health and Human Services told its local offices in a letter dated October 10 not to process applications for November benefits until the federal government reaches a deal to restore normal operations.

“We are heavily dependent on federal dollars,” said Julie Henry, spokeswoman for the state HHS department. “When these kinds of things happen at the federal level, it has an immediate impact.”

“We are heavily dependent on federal dollars,”

Translate: we are heavily dependent upon theft and redistribution.

Repeal the 16th Amendment and there will be plenty of unextorted money left in North Carolina which the residents may choose to share with the truly needy via voluntary charity.