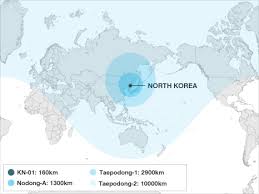 North Korea’s continuing development of nuclear technology and long-range ballistic missiles will move it closer to its stated goal of being able to hit the United States with an atomic weapon, a new Pentagon report to Congress said on Thursday.

The report, the first version of an annual Pentagon assessment required by law, said Pyongyang’s Taepodong-2 missile, with continued development, might ultimately be able to reach parts of the United States carrying a nuclear payload if configured as an intercontinental ballistic missile.

North Korea launched a multi-stage rocket that delivered a satellite into orbit in December, an advance that “contributes heavily” to the country’s development of a long-range ballistic missile capability, the report said.

It is also continuing to refine its atomic weapons capability, including with a nuclear detonation in February, and is capable of conducting “additional nuclear tests at any time,” the report said.

“These advances in ballistic-missile delivery systems, coupled with developments in nuclear technology … are in line with North Korea’s stated objective of being able to strike the U.S. homeland,” the report said.