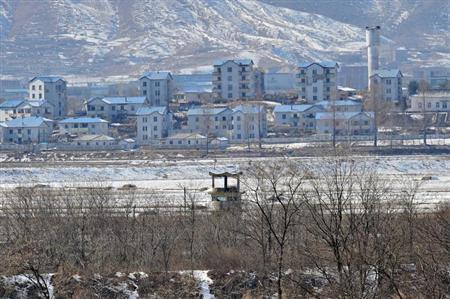 A North Korean guard post (C) in the propaganda village of Gijeongdong is seen from South Korea’s Taesungdong freedom village, near the border village of Panmunjom, during a graduation ceremony for Taesungdong Elementary School, in Paju, February 15, 2013. REUTERS/Jung Yeon-je/Pool

North Korea has cut off a Red Cross hotline with South Korea as it escalates its war of words against Seoul and Washington in response to a military drill in the South and U.N. sanctions imposed for its recent nuclear test.

The North had threatened to cut off the hotline on March 11 if the United States and South Korea did not abandon their joint military exercise.

The Red Cross hotline is used to communicate between Seoul and Pyongyang which do not have diplomatic relations.

“We called at 9 a.m. and there was no response,” a government official from South Korea said. The line is tested each day.