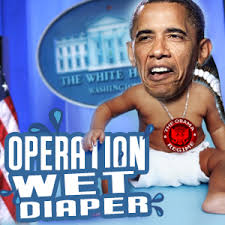 As the true legacy of Obama continues to unfold, we at least now can find comfort that the pResident has stopped blaming his epic failures on George W. Bush. It took almost five years, but Obama now is blaming the Republican party for Obamacare’s “rockier rollout” due to the GOP’s investment in failure.

The boy who would be king needs to have his diapers changed. Even the media is starting to smell this administration’s stench on Liberty.

Obama says rebranding Obamacare will be hard given politics

“We should have anticipated that that would create a rockier rollout,” Obama told a Wall Street Journal conference.

“One of the problems we’ve had is one side of Capitol Hill is invested in failure,” Obama said.