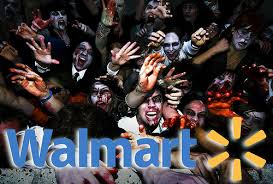 What does it tell us about the pResident’s recovery when a bath towel was Wal-Mart’s top selling item on Black Friday?

The must-have item at Wal-Mart on “Black Friday” wasn’t a mega TV, sleek tablet or the latest giggling Elmo. It was towels.

It’s a sign of the times that consumers battered by a recovery that has boosted corporate profits but has done little to raise their own bottom lines are reduced to scrapping over basic bathroom supplies.

The retailer announced it had sold 2.8 million towels during the shopping event, which this year started even earlier at 6 p.m. on Thanksgiving Day. The textile sales outpaced the 300,000 bicycles, 1.4 million tablets and 2 million televisions sold during the period, and also beat last year’s towel sales by 1 million.

This entry was posted in Domestic Enemies, Editorial, Financial. Bookmark the permalink.