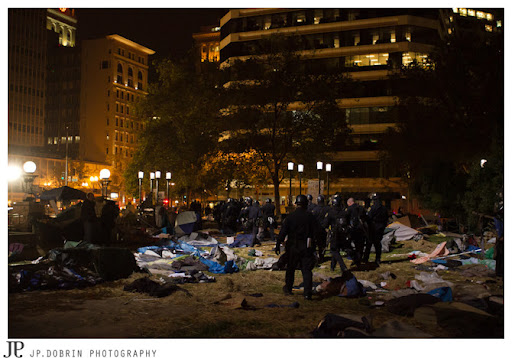 The following video contains footage directly from Oakland, CA and Atlanta, GA concerning the civil unrest and arrests associated with the occupation:

Eight people were arrested last night in Asheville, NC bringing the total to fifteen arrests. The organizers of this movement have a decision to make: stand down for winter or escalate the violence now. If the latter decision starts to gain momentum with the November 5th Bank Transfer Day, civil unrest throughout the nation will become the legacy of this administration.

On 10-25-11, at approx. 10:20 pm, members from the Occupy Asheville Group formed in protest outside of City Hall. Officers from the APD approached the group and asked them to leave since city hall and the park was closed.

The majority of this group relocated to the area of the park near College and Spruce St. and continued their protest.

After approx. an hour, dialogue was reinitiated and the members of the group were given a number of alternative sites to exercise their constitutional right to free speech which didn’t involve trespassing in the park after hours.

While the majority of the group agreed to exercise their rights elsewhere; a total of 8 individuals advised that they were prepared to be arrested and refused to leave. A designated supervisor then re-approached each individual and again asked them to leave the park and requested their voluntary compliance in doing so. When each subject again refused, they were taken into custody and transported to the Buncombe County Detention Facility. Each was charged with 2nd Degree Trespass.