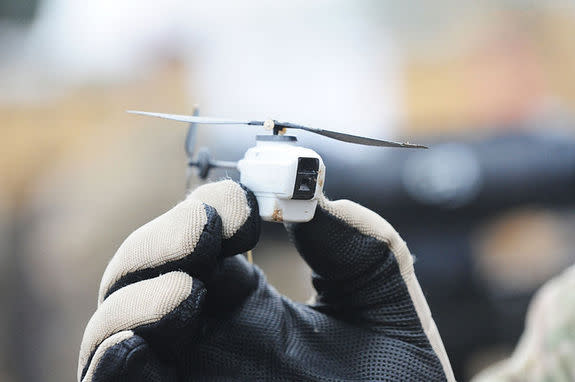 Weighing only 0.56 ounces (16 grams), the Black Hornet looks like a tiny toy helicopter. But it’s really a nano-size piece of military hardware unlike anything on the battlefield today — experimental robot flies and hummingbirds not withstanding.

The PD-100 Black Hornet Personal Reconnaissance System, unveiled to the American public for the first time last week at the Association of the United States Army Expo in Washington, D.C., is a drone (actually, a pair of them) that a soldier can carry and operate as easily as he or she would a radio.

Since last year, the British infantrymen in Afghanistan have been using the new Black Hornets on a variety of missions — from scouting routes for possible enemy ambushes to peeking over the walls of a nearby compound.

This entry was posted in Editorial and tagged Black Hornet, Drone. Bookmark the permalink.