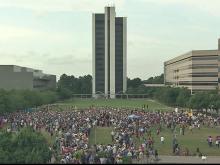 State Capitol Police said 120 people were arrested Monday following the largest NAACP-led demonstration yet against the policies of the Republican-controlled North Carolina legislature.

The eighth week of what the civil rights group calls “Moral Mondays” brought the number of people facing charges to nearly 600. Hours before the most recent group left the General Assembly building in plastic handcuffs, the first batch of protesters appeared in Wake County Court for an initial hearing.

Glen Allen, the state capitol police chief, estimated that about 1,500 people attended a rally behind the Legislative Building before protesters choosing to face arrest entered the building. He said the figure was based on crowd samples of his officers, who differed somewhat on the estimate but considered the crowd to be the largest since demonstrations began in late April.