QE III: Time to End the “Sanction of the Victim” 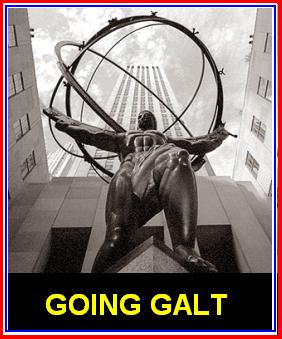 Although the following quote from from Atlas Shrugged should be considered to be a simple statement of truth, the world is seeing how corruption and power have destroyed the value of money:

“It is not the moochers or the looters who give value to money.”

Once the value of money is debased and our property seized by both direct and indirect measures, the consequences will be based solely on the will and morality of the people. A people who are willing to be subjugated by moochers and looters will suffer enslavement without hope. Until, as history has shown, a revolution removes the inevitable dictator(s). For those readers who are unfamiliar with the terms “looters”, “moochers” and “producers”, I strongly encourage you to read Atlas Shrugged.

Without a moral center, the Republic will fall. I strongly encourage you to read the Bible to understand Atlas Shrugged in a moral context.

And then understand the lessons of Hank Reardon’s trial:

–The government’s hold on us is not as strong as it seems.
–The government needs our sanction/cooperation to maintain the illusion of their legitimacy.
–Withdraw your own sanction, and the powers that be are laid bare;  their power is derived through the barrel of a gun, not through any intrinsic validity of their own.

We must stop giving the government our sanction of being their victim to preserve what we feel is an inviolate American dream. Once that sanction is truly understood as Mr. Reardon realized, their “power” over us is exposed. As stated above, their power is derived through the barrel of a gun (and 1.4 billion hollow point rounds).

“So you think that money is the root of all evil?” said Francisco d’Anconia. “Have you ever asked what is the root of money? Money is a tool of exchange, which can’t exist unless there are goods produced and men able to produce them. Money is the material shape of the principle that men who wish to deal with one another must deal by trade and give value for value. Money is not the tool of the moochers, who claim your product by tears, or of the looters, who take it from you by force. Money is made possible only by the men who produce. Is this what you consider evil?

“When you accept money in payment for your effort, you do so only on the conviction that you will exchange it for the product of the effort of others. It is not the moochers or the looters who give value to money. Not an ocean of tears not all the guns in the world can transform those pieces of paper in your wallet into the bread you will need to survive tomorrow. Those pieces of paper, which should have been gold, are a token of honor–your claim upon the energy of the men who produce. Your wallet is your statement of hope that somewhere in the world around you there are men who will not default on that moral principle which is the root of money, Is this what you consider evil?

This entry was posted in Editorial, Financial and tagged Atlas Shrugged, Francisco, Money, NC Renegade, Sanction of the Victim. Bookmark the permalink.