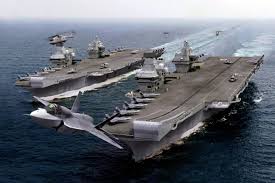 The strategy is a Chinese version of what Beijing has charged is a U.S. strategy designed to encircle and “contain” China. It is also directed at countering the Obama administration’s new strategy called the pivot to Asia. The pivot calls for closer economic, diplomatic, and military ties to Asian states that are increasingly concerned about Chinese encroachment throughout that region.

The Chinese are deftly parrying our ‘Pivot to the Pacific’ with their own elegant countermoves,” said John Tkacik, a former State Department Asia hand.
Chinese President Xi Jinping is expected to question President Barack Obama about the U.S. pivot during the summit meeting set to begin Friday afternoon in California. Chinese state-run media have denounced the new U.S. policy as an effort to “contain” China and limit its growing power.