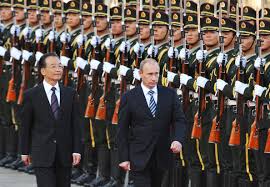 More than 7,000 troops from China, Russia and four central Asia countries have gathered in Inner Mongolia for their biggest joint drills “to fight terrorists”. The drills are purportedly to prepare troops to protect the so-called Silk Road economic and transport belt that will run through central Asia from China to Europe from terrorist attack, but as one analyst notes, “it is kind of rare to have an anti-terrorist mission which uses battle tanks.” Furthermore, as part of a drill:

So, surface-to-air missile tests? Not very “de-escalation”-y. Perhaps this statement is a clue, “we are trying to exercise together to coordinate our troops to meet any potential eventuality.”

As The Jakarta Globe reports,

A total of 23 Chinese aircraft will participate in Peace Mission-2014, along with tanks, drones and air-defense missiles from countries in the Shanghai Cooperation Organization, China’s Xinhua News Agency reported. The SCO groups China, Russia, Kazakhstan, Kyrgyzstan, Tajikistan and Uzbekistan.

At what point do we become sentient and realize that this pResident is putting us in danger? Arrogance and incompetence will lead to our destruction.