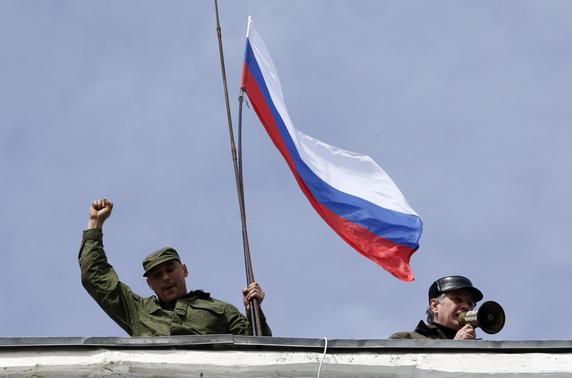 A man holds a Russian flag on the roof of the naval headquarters in Sevastopol, March 19, 2014. REUTERS-Vasily Fedosenko

Russian troops backed by unarmed volunteers stormed Ukraine’s naval headquarters in the Crimean port of Sevastopol on Wednesday and raised the Russian flag, as Moscow tightened its control of the Black Sea peninsula.

The dramatic seizure came as Russia and the West dug in for a long confrontation over Moscow’s annexation of Crimea, with the United States and Europe groping for ways to increase pressure on a defiant Russian President Vladimir Putin.

Russian lawmakers raced to ratify a treaty making the Ukrainian region part of Russia by the end of the week, despite threats of further sanctions from Washington and Brussels.

The Russian military moved swiftly to neutralize any threat of armed resistance in Crimea.

“This morning they stormed the compound. They cut the gates open, but I heard no shooting,” said Oleksander Balanyuk, a captain in the navy, walking out of the compound in his uniform and carrying his belongings.

This entry was posted in Editorial and tagged Crimea, Naval, Ukraine. Bookmark the permalink.