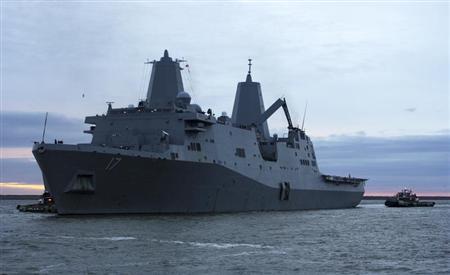 A sixth U.S. warship is now operating in the eastern Mediterranean, near five U.S. destroyers armed with cruise missiles that could soon be directed against Syria as part of a “limited, precise” strike, defense officials said late on Friday.

They stressed that the USS San Antonio, an amphibious ship with several hundred U.S. Marines on board, was in the region for a different reason and there were no plans to put Marines on the ground as part of any military action against Syria.

One of the officials said the San Antonio’s passage into the Mediterranean was long-planned, but officials thought it prudent to keep the ship in the eastern Mediterranean near the destroyers given the current situation.

“It’s been kept there as a precaution,” said one of the officials, who was not authorized to speak publicly.