Stupid Is as Stupid Does 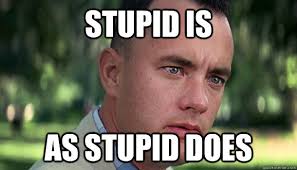 Yesterday, when Gazprom was supposedly “troubleshooting its systems”, we reported that in what was the first salvo of Europe’s latest cold (quite literally, with winter just around the corner) war, Poland complained that up to 25% of its usual gas deliveries from Russia had been cut. Russia indirectly hinted that this was also a result of Ukraine using “reverse flow” to meet its demands, with Europe allowing Kiev to syphon off whatever gas it needs without paying Gazprome for it. It also led Poland to promptly admit it would halt reverse flow to the civil-war ridden country. Fast forward to today when Polish financial website Biznes reports that things are going from bad to worse in Russia’s energy retaliation war, after Poland claimed a 45% shortfall in Russian natgas imports as of Wednesday.

Not surprisingly, Gazprom has said that is not the case, which leaves two options: either someone is lying, or the Ukraine is quietly, and illegally syphoning off gas destined for Europe.

There are always consequences for your actions. What did Europe think would happen when they implemented sanctions against Russia? Regardless, winter is coming.