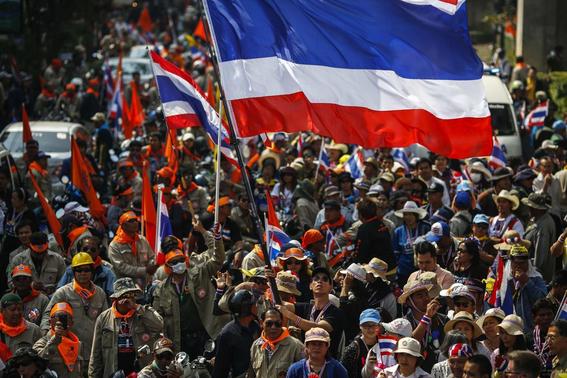 What happens when the middle and upper class are ruled by the lower class? In Thailand’s (Land of the Free) case, they protest and start considering a military coup. The government is considering the implementation of a state of emergency.

In our case, the class ruling over us is in power by buying votes through entitlements and workfare. Government surveillance and general apathy have not rekindled the spark of freedom necessary to overcome the majority of the people who have sold everyone’s freedom for thirty pieces of silver on an EBT card.  But the clock is ticking.

Thai authorities are “very seriously” considering a state of emergency after a weekend of violence in the capital where protesters have been trying for more than two months to bring down the government, the security chief said on Monday.

The violence is the latest episode in an eight-year conflict that pits Bangkok’s middle class and royalist establishment against poorer, mainly rural supporters of Prime Minister Yingluck Shinawatra and her brother, ex-premier Thaksin Shinawatra, who was toppled by the military in 2006.

“We’re prepared to use the emergency decree … Everyone involved including the police, the military and the government is considering this option very seriously, but has not yet come to an agreement,” National Security Council chief Paradorn Pattantabutr told Reuters after meeting Yingluck.

This entry was posted in Civil Unrest, Editorial and tagged Thailand. Bookmark the permalink.