The Bank Runs Have Started 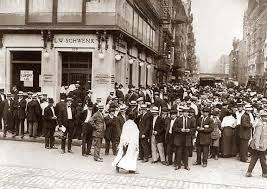 It made no sense. Why would people keep their money in a bank for 0.01% interest while real inflation is running close to 6%? Where were the bank runs since the Cypriot bail-in (theft) was made public? It appears that people were withdrawing their money but the media was not reporting it. The joke about what is in your wallet now has a definitive answer: what used to be in your bank.

It appears, given news from Italy today, that European depositors are increasingly coming to the realization that deposits in their local bank are not ‘safe’ places to put their spare cash, but are in fact loans to extremely leveraged businesses. In a somewhat wishy-washy, ‘hide-the-truth’-like statement on Monte dei Paschi’s website, the CEO admits to, “the withdrawal of several billion in deposits.” Of course, the reasons why these depositors withdrew their capital from the oldest bank in the world will never be known though of course he blames it on “reputational damage” from their derivative cheating scandal. Unsurprisingly, as Reuters notes, the CEO declined to give a forecast on the level of deposits at the end of the first quarter of 2013; no wonder given the bank just doubled its expectations for bad loans and the ‘Cypriot Solution’ dangling over uninsured depositor hordes.