The Beginning of the American Spring? 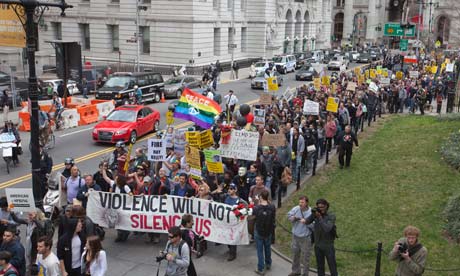 Occupy Wall Street is ramping up their efforts for their previously announced American Spring offensive. Sunday, March 25th is a day of protest across the nation. Occupy Raleigh will be holding their “offensive” at the General Assembly from 2:00 to 4:00 PM.

Protesters marched from the movement’s original base of operations, Zuccotti Park, in lower Manhattan to Union Square, where occupiers and police have been facing off for the past week.

The mood varied from playful to confrontational throughout the afternoon. A handful of occupiers had fashioned their bicycles to look like police scooters, wore mock police uniforms and barked familiar orders at protesters as they passed.

Early on, at least two young women and a man were arrested after the women laid on their backs in a busy intersection. “I don’t respect your authority,” one yelled as she was led away by police.

Tensions escalated as the march moved into the SoHo and Chinatown districts, where streets are narrow and ill-equipped to accommodate scores of energetic protesters. Approximately a half dozen more people were arrested or detained in a brief period of intense confrontations in the area. Participants in the march had made repeated attempts to move into roadways and the police responded by sending in helmeted officers carrying batons and bundles of zip-tie handcuffs.

One protester appeared to suffer an injured ankle and a plainclothes officer was seen blocking the camera of a New York Times photographer as he attempted to document an arrest.