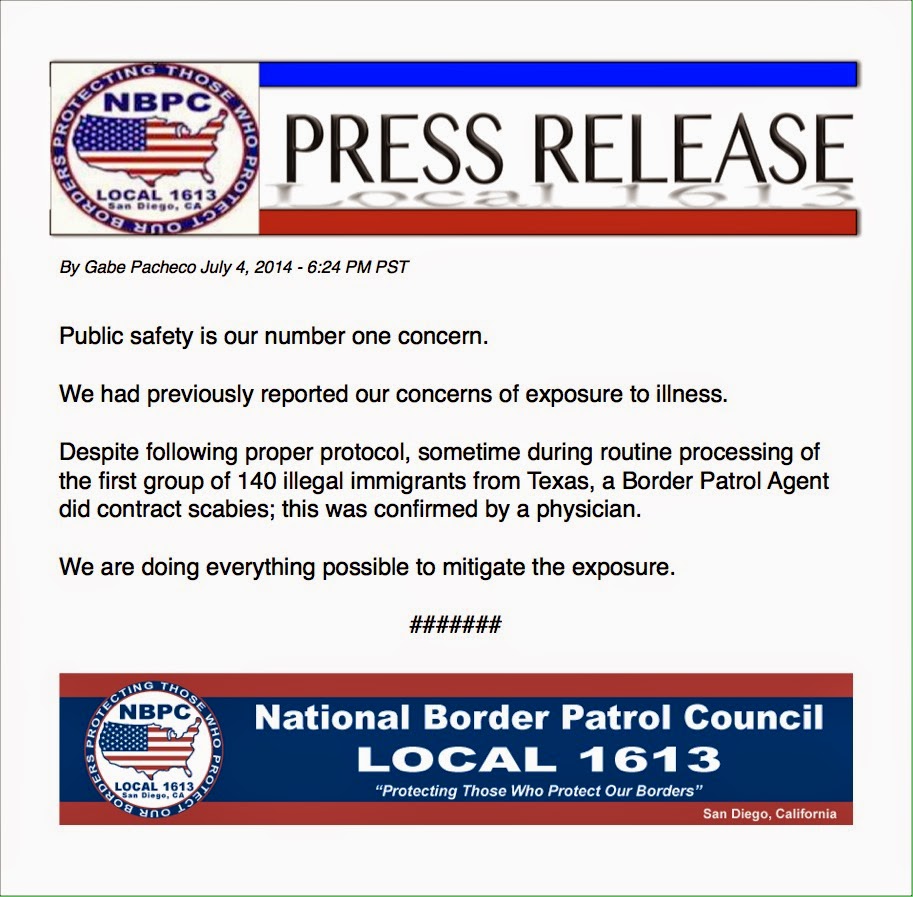 Under Arizona state law, it is a felony to introduce disease into the state:

A. It is unlawful for a person to knowingly introduce into this state a disease or parasite of animals or poultry that constitutes a threat to:

B. This section does not apply to research conducted by government or educational institutions.

C. A violation of subsection A:

The attorney general of Arizona has documented the illegal act of the federal government for the transport of illegal aliens into their state:

Arizona Attorney General Tom Horne formally demanded the federal government “cease and desist” from transporting illegal immigrants to his state or else face a possible lawsuit.

Arizona Attorney General Tom Horne formally demanded the federal government “cease and desist” from transporting illegal immigrants to his state or else face a possible lawsuit.

In a letter to Department of Homeland Security Sec. Jeh Johnson, Horne called on the government to halt the shipments of untold hundreds of illegal immigrant families to Arizona.

The federal government has publicly acknowledged that there are outbreaks of pneumonia and swine flu outbreaks among illegal children in California:

Outbreak on the Border

Health authorities at a Navy base in Southern California took steps last weekend to curtail an outbreak of pneumonia and swine flu among illegal immigrant children housed at the facility, according to U.S. officials.

The outbreak of disease among several of the nearly 600 immigrant children at the Naval Base Ventura County, located north of Los Angeles, initially was thought to be caused by deadly bacterial streptococcal meningitis, according to one official close to the issue.

Consider the definition of reckless endangerment:

Reckless endangerment is a crime consisting of acts that create a substantial risk of serious physical injury to another person. The accused person isn’t required to intend the resulting or potential harm, but must have acted in a way that showed a disregard for the foreseeable consequences of the actions. The charge may occur in various contexts, such as, among others, domestic cases, car accidents, construction site accidents, testing sites, domestic/child abuse situations, and hospital abuse. State laws and penalties vary, so local laws should be consulted.

The Obama administration has pursued a policy of reckless endangerment by allowing tens of thousands of illegal aliens to enter the United States in direct violation of our sovereign immigration laws. It has been documented by the federal government that swine flu and pneumonia outbreaks have been a result of this policy. Tuberculosis , hand-foot-and-mouth disease, Chagas disease and chicken pox have been verified by US border patrol agents.

Since these policies have put the health of the entire population of the United States at risk by distributing these children across the country without any medical evaluations or security, I petition the government to arrest the president for recklessly endangering the people of the United States by the introduction of communicable diseases which could lead to several pandemics.

If you agree with the information below, please sign and promote the petition at the White House: https://petitions.whitehouse.gov/petition/stop-reckless-endangerment-people-united-states-introduction-communicable-diseases/w2WcYT8j

Once the petition reaches 150 signatures, it will be shown to the public without a direct link.

Good effort, but SCOTUS will undoubtedly rule that FedGov is exempt under Arizona 13-2912 Sect. B. The “release” of non-indigenous disease carriers are being conducted to verify theoretical epidemiological diffusion studies.

The crisis of arrogance and overreach

YEAH, another lawsuit, like that will stop anything before the Feds are done doing their damage. Arizona needs to call up their state Guardsmen, deputize their citizens and do whatever it takes under force of arms to stop this invasion. Words and paperwork doesn’t seem to be working.

There is a difference in this case since it is a time sensitive issue. The longer this goes on, the greater the odds of a national pandemic. Maybe that is the point since the new world order wants only 500 million people on the planet.

Oooh no! A lawsuit. Yeah… The. Regimen must be real scared.