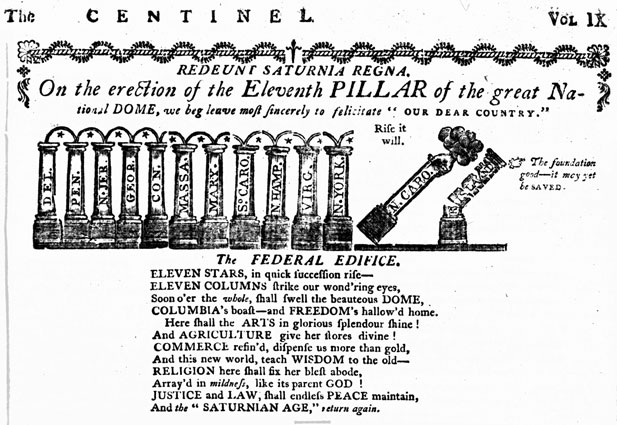 This picture is an interesting one because it shows 11 states who were overall accepting of the Constitution, and interestingly, in order of ratification too, from Delaware to New York, with the latter being the most stubborn to ratification. However, North Carolina is having trouble accepting it because of their anti-federalist beliefs and Rhode Island is typically called “Rogue Island” for a reason and they were extremely stubborn to accept it. Overall, most states were worried about a strong central government taking away individualistic rights, especially the bigger, more aristocratic states but eventually it was accepted as the only reasonable solution to government.

“The Federal Edifice” was published August 2, 1788 in the Massachusetts newspaper “The Centinel” is representative of the states ratification of the Constitution. By this time in 1788 all states but North Carolina and the always stubborn “Rogues” Island had ratified the constitution. These anti-federalist “laggard” states. In North Carolina the Ratifying convention was a violent argument and ended in no vote, while Rhode Island didn’t even hold a convention. These two states were the most individualistic states of all the colonies, and feared the power of central government in the new constitution. In the end the two ratified after several months into the institution of the constitution. The two states are symbolized by collapsing pillars, because as it was believed at the time that the states could not exist outside of the union for long, safely at least.

There are still some people in Rhode Island and the Providence Plantations willing to stand up to a centralized government. Rhode Island was also known as Rogue’s Island and did not attend the Constitutional Convention which dissolved the “perpetual union” of the Articles of Confederation.

“Sections 1021 and 1022 of the act, signed into law on New Years Eve of 2011, provide for the indefinite detention of American citizens by the military on American soil, without charge, and without right to legal counsel and right to trial.”

“Given the fact that the constitutions of Rhode Island and that of the United States are replete with guarantees of individual liberties, right to habeas corpus, and right to freedom of speech, the offending sections of that law are repugnant to the sensibilities of anyone that has a basic understanding of the foundation of this country.”

The following synopsis of the NDAA explains why this is one of the most egregious examples of tyranny in our nation’s history.

“One of the most extraordinary documents in human history – the Bill of Rights – has come to an end under President Barack Obama. Derived from sacred principles of natural law, the Bill of Rights has come to a sudden and catastrophic end with the president’s signing of the National defense Authorization Act, a law that grants the U.S. military the ‘legal’ right to conduct secret kidnappings of U.S. citizens, followed by indefinite detention, interrogation, torture and even murder. This is all conducted completely outside the protection of law, with no jury, no trial, no legal representation and not even any requirement that the government produce evidence against the accused.”

This law classifies the United States as a field of combat. When enough Americans wake up and understand what is happening, this will become true.

If the Government begins to actually use the new found power, that will be the call to arms. I was ready a long time ago. I don’t know what it will actually take to fire up the American people. We need to have the “million dad march” in Washington, with our rifles. I’ll bet that would be an attention grabber.