Too Many Unanswered Questions Concerning Benghazi 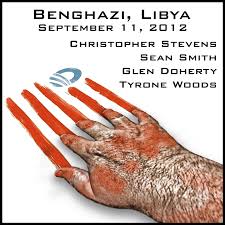 The Congressional Oversight Committee’s Benghazi hearing on May 8th brought new information into the public forum. The whistle blowers all were credible.

But. They were not Washington insiders. I want answers to these unasked questions:

1. Who developed and implemented the false story of a protest based on a YouTube video?

2. Was the media complicit in propagating the lies?

4. Why did Washington “leaders” watch the events unfold without any action?

5. Why did our president override the truth when the Libyan president gave a faithful account?

6. Was Christopher Stevens running guns from Libya to the Muslim Brotherhood in Syria?

7. When did the president first know about the attack? Why did he go to bed when a US ambassador was missing?

8. When is the director of the YouTube video going to be released from jail?

9. Where did the money come from to procure a large shipment of firearms to Libya since the requested funds for additional security in Libya was rejected for “lack of funds”?

10. Did Susan Rice knowingly lie about the protest that never even occurred?

Will there be more hearings or was this a show of bravado? Unless a whistle blower from inside the beltway comes forward with the Washington timeline and coverup details, I believe this will become another example of Washington treachery and American apathy. With four case of “collateral damage”.

Don’t need no stinking committee of politicians to answer those questions.
1. Hillary, aka “Killery”
2. Does a bear crap in the woods?
3. Yes. Obama via Pannetta
4. That would be concrete proof that Al Queda wasn’t on the run and the Pax Obama was a political lie in an election year.
5. The truth and the four dead Americans’ bodies landed under the bus about the same time.
6. See #2 above.
7a. When SecDef and Chairman of Jpoint Chiefs told him around 5PM. 7b. You have to be rested and alert while engaged in arduous travel and campaign fund raising.
8. When everyone has finally acknowledge that Islam is a peaceful religion in spite of all the evidence to the contrary.
9. CIA Black Ops funds.
10. Political hacks do what they are told to further their career even if it means lying for your benefactor.

Such events will continue until we determine to make tassels out of those who practice the black art of treason, regardless of their wealth, office, or position. Lets start from the top, and work our way down -- that way we will make it clear that no one is above the law. No one!