TPP would literally destroy the sovereignty of the U.S. 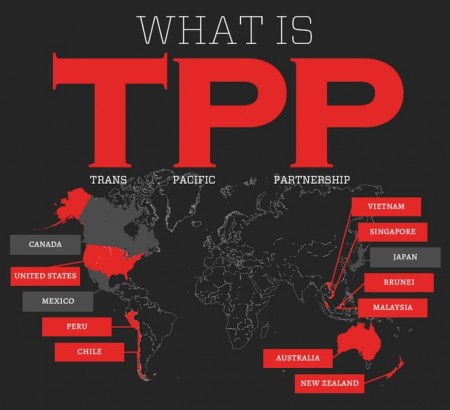 An international treaty being negotiated in secret which would not only crack down on Internet privacy much more than SOPA or ACTA, but would actually destroy the sovereignty of the U.S. and all other signatories.

It is called the Trans-Pacific Partnership (TPP).

We also noted that even Congressmen are furious that the bill was being kept secret from the American public.

And that the TPP is an anti-American power grab by big corporations.

Wikileaks has now leaked the intellectual property chapter of the secret treaty … and it’s as bad as we feared.

Public Citizen explains how the TPP would limit people’s access to affordable medicine.

The TPP’s chapter on IP deals with a host of issues, but its potential impacts on basic Internet freedom and usage are perhaps the ones that would directly impact the most people in the short term. One of the biggest concerns about the agreement raised by the Internet freedom advocacy group the Electronic Frontier Foundation centers around the concept of “temporary copies.” Here’s the text of the relevant section of the TPP’s intellectual property chapter leaked Wednesday:

“Each Party shall provide that authors, performers, and producers of phonograms have the right to authorize or prohibit all reproductions of their works, performances, and phonograms, in any manner or form, permanent or temporary (including temporary storage in electronic form).”

This entry was posted in Editorial, Financial and tagged TPP, Trans Pacific Partnership. Bookmark the permalink.