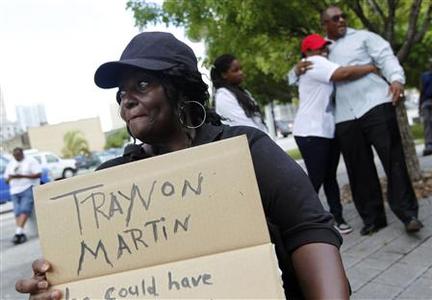 Trayvon Martin’s parents joined celebrities and hundreds of protesters on Saturday in rallies across the country to express anger over the acquittal of the man who shot and killed the unarmed black teenager.

Singing the civil rights protest song “We Shall Overcome,” a crowd gathered around Trayvon’s father, Tracy Martin, in Miami exactly one week after a Seminole County jury in central Florida acquitted George Zimmerman of second-degree murder and manslaughter in the incident, where the 17-year-old Martin was shot through the heart.

In New York, about 200 people cheered as rapper Jay-Z and his wife, singer Beyonce, took the stage where the victim’s mother, was expected to speak later. Some hoisted signs reading “Boycott Florida” and many wore T-shirts with a photo image of Martin wearing a hooded sweatshirt.

“I’ve got four beautiful daughters. I want them to look forward rather than behind their backs,” said Harlem resident Maria Lopez, 31, who attended the rally with her children.

Visible above the neckline of her Trayvon T-shirt was a tattoo of a packet of Skittles, the candy the teen was carrying on a walk back from the store when he was shot dead by the neighborhood watchman.

The protests, outside federal court buildings and police headquarters, were organized by the Reverend Al Sharpton, the veteran civil rights activist, days before President Barack Obama spoke extensively about the Martin case and highlighted its racial undertones.

A “massive” protest was held today at the US Consulate in Toronto Ontario.. it was attended by one (1) protester… The expected vandalism was evidently limited to a dropped gum wrapper…