The Dixie Gun and Knife show in Raleigh will be open tomorrow (Sunday, January 20th). However, no private sales of firearms will be allowed. Again, I have to ask why?

Three individuals (not two) were injured.

What are the facts at this time?

1. The event was shut down due to circumstances caused by  a private individual.
2. People inside lost their entry fee ($8.00) and vendors lost revenue. People who were outside were turned away.
3.  The show will be open on Sunday but all private sales are now prohibited.

It appears that both individuals are fine. Thank the Lord. 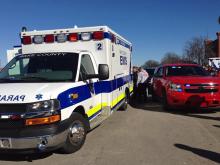 At least two people were injured Saturday afternoon in an apparent accidental shooting at the gun show being held at the North Carolina State Fairgrounds. Emergency crews responded to the scene shortly after 1 p.m., and two people were loaded into ambulances. A witness told WRAL that a gun went off after being checked by an official at a safety check-in location, hitting a man in the hand and a woman in the side. The Raleigh Fire Department confirmed that the Dixie Gun and Knife Show would be closed for the remainder of the day Saturday. There was no word on whether the show, which is held inside the Jim Graham Building, would continue Sunday.

according to this video of the press conference, the weapon, a 12 ga. shotgun was being presented by the owner to be checked, when it accidentally fired. There will be no private sales tomorrow and the future of private sales is uncertain. It would seem, to me, to be the OWNER that had the problem-bringing a loaded firearm to the show. Whether or not the individual knew it to be loaded, hasn’t been indicated. I’m not sure how local law enforcement can be blamed for this even though the tendancy right now, might be to be irritated with LEOs. According to this conference, “the 2 individuals are fine” -- I’m not sure where that came from -- that info wasn’t included in this press conference.
I WILL say that as a side note, I was pretty PO’d when I saw a young man walking around the show, carrying a gun that it looked like he had purchased, with his flippin finger on the trigger! PLEASE, people, be careful! Use common damn sense when you are carrying a gun. Don’t be a dumbass and give the gungrabbers more ammunition to use against the rest of us in the court of public opinion!

I put the video in the article update.

I wanted to add one caveat to the above comment, but a cat was irritating my chicken and I went ahead and posted so I could check on her!

So, the problem was a loaded gun going off accidentally, which has happened since the beginning of time, on rare occasions. OR, for those who like to argue against any and all gun laws/restrictions, I’ll go ahead and post it for you -- the problem is that someone was violating the owner’s 2nd amendment rights by requiring the firearm be inspected and rendered useless 🙁
In any case, I wouldn’t be surprised if all future, private sales at the Fairgrounds were ended…which would be a crying shame.

This video shows the latest from WRAL.