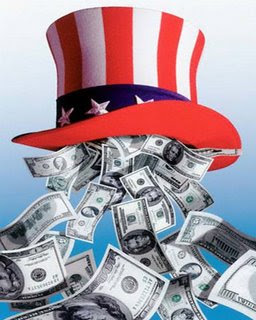 The report for retail sales came out this morning and I have included two reports outlining the information. Retail sales dropped 0.2% last month and was the first decline in eleven months. The first report from Bloomberg.com outlines why this is good news as a larger drop was expected. The second report from CNBC.com gives a more accurate report. My thoughts:

Since corn hit a new record last week and a large percentage of this year’s harvest in the mid West has been lost to flooding, I see no relief in food prices. As of 11:00 AM, the stock market is up 132 points based on this “good” news.

The 0.2 percent decrease in retail sales was smaller than forecast and followed a 0.3 percent April gain that was less than previously estimated, Commerce Department figures showed. The median forecast of economists surveyed by Bloomberg News was a drop of 0.5 percent.

Futures advanced earlier after China reported that industrial production climbed more than estimated in May, while inflation last month accelerated to the fastest pace in almost three years. Production gained 13.3 percent from the year before, exceeding the median economist forecast of 13.1 percent in a Bloomberg survey. The 5.5 percent annual gain in consumer prices matched estimates.

U.S. stocks rose yesterday, with the S&P 500 rebounding from an almost three-month low, as a pickup in takeovers and the cheapest valuations in almost a year helped offset concern that the economic recovery is faltering.

Retail Sales Slip, Inflation Up as Economy Creeps Along

U.S. retail sales fell in May for the first time in 11 months, dragged down by a
sharp drop in receipts from auto dealerships, according to a government report
that could raise fears of a prolonged economic slowdown.

At the same time, wholesale prices rose at the slowest pace in 10 months in May as food costs fell and gas prices rose by the smallest amount in eight months. The figures suggest consumers could see some relief from rising prices soon.

The Labor Department says the Producer Price Index, which measures price changes before they reach the consumer, increased 0.2 percent in May. That’s down sharply from a 0.8 percent rise in April and a 0.7 percent increase in March. In the past 12 months, the
index has risen 7.3 percent, the most since September 2008.

Excluding the volatile food and energy categories, the so-called “core” index also increased 0.2 percent, driven by higher prices for plastics, clothing and new cars. The core index has risen 2.1 percent in the past year.

This entry was posted in Editorial and tagged NC Renegade, Retail Sales. Bookmark the permalink.