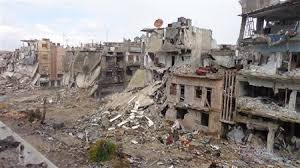 The Obama administration is moving toward a major policy shift on Syria that could provide rebels there with equipment such as body armor and armored vehicles, and possibly military training, and could send humanitarian assistance directly to Syria’s opposition political coalition, according to U.S. and European officials.

The administration has not provided direct aid to the military or political side of the opposition throughout the two-year-old conflict, and U.S. officials remain opposed to providing weapons to the rebels.

Elements of the proposed policy, which officials cautioned have not yet been finalized, are being discussed by Secretary of State John F. Kerry in meetings this week and next with allies in Europe and the Middle East as part of a coordinated effort to end the bloody stalemate, which has claimed about 70,000 lives.

Those talks — along with a nearly two-hour meeting in Berlin on Tuesday with Russian Foreign Minister Sergei Lavrov and a Thursday conference with allies and leaders of the Syrian Opposition Coalition in Rome — are expected to weigh heavily on administration deliberations.

This entry was posted in Editorial, War and tagged aid, Obama, Rebels, Syria, US. Bookmark the permalink.