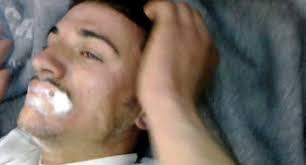 Finally, and confirming this whole development is nothing but one big false-flag facade, earlier we got reports that the UN has heard testimony that Syrian rebels may have used sarin gas, Carla Del Ponte, a UN investigator, said in an interview, Swiss television station RSI’s website says. There is “strong and concrete” suspicion, though not yet any “incontestable” proof according to Del Ponte, and the punchline is that according to “testimony so far suggests only rebels used sarin.”

Carla Del Ponte, a member of the UN independent commission of inquiry on Syria, said that testimony gathered from casualties and medical staff indicated that the nerve agent sarin gas was used by rebel fighters.

“Our investigators have been in neighbouring countries interviewing victims, doctors and field hospitals and, according to their report of last week which I have seen, there are strong, concrete suspicions but not yet incontrovertible proof of the use of sarin gas, from the way the victims were treated,” Ms Del Ponte said in an interview with Swiss-Italian television, broadcast on Sunday.

“This was used on the part of the opposition, the rebels, not by the government authorities,” she added, speaking in Italian.

Ms Del Ponte added that the inquiry has yet to see any direct evidence suggesting that government forces have used chemical weapons, but said further investigation was required before this possibility could be ruled out.

The new claims come one week after the United States said it had “varying degrees of confidence” that sarin had been used by Syria’s government on its people.

More warmongering lies by the US government and its Nobel peace prize-winning leader: how inconceivably unpossible…

Does anyone really believe that the al Qaeda and Muslim Brotherhood rebels supported by Obama are capable of using sarin gas? (just to be clear, this is sarcasm).

Puzzles me that the UN is supporting the truth in this matter.