US Soldiers Disarmed During Panetta’s Speech in Afghanistan 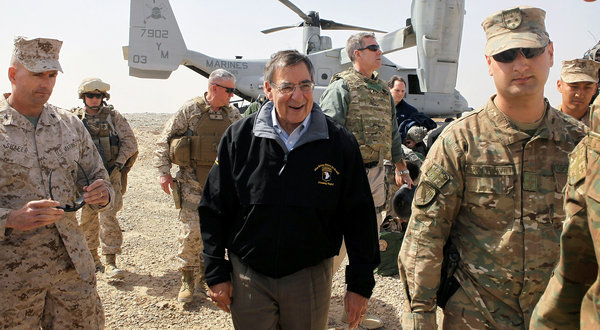 The US Secretary of Defense, Leon Panetta, made a surprise visit to Afghanistan today. This should not have been unexpected based on the Koran burnings and the murder of 16 Afghani civilians by a US soldier.  What is unexpected is the disarming of our soldiers prior to his speech. If the Secretary of Defense does not trust our soldiers with his security, should we trust them to defend the United States and Americans?

The answer is an unqualified yes. This is not about trusting soldiers: this is about the perceived threat from our men and women against the current administration. The government has labelled returning veterans as possible domestic terrorists (along with God-fearing patriotic Americans). It appears that this definition has just become more comprehensive and now includes our active military.

If this is not a fair assessment of the lack of respect that the military is shown by the “commander-in-chief” and his minions, the only other option is that the administration considers our military as a threat to their security.

For what it is worth, I give our military the respect and honor that they deserve for defending this country against enemies both foreign and domestic.

Panetta Is Safe After Breach Near His Plane at Afghan Base

In a sign of the nervousness surrounding the visit, Marines and other troops among the 200 people gathered in a tent at Camp Leatherneck to hear Mr. Panetta speak were abruptly asked by their commander to get up, place their weapons — M-16 and M-4 automatic rifles and 9-mm pistols — outside the tent and then return unarmed. The commander, Sgt. Maj. Brandon Hall, told reporters he was acting on orders from superiors.

Normally, American forces in Afghanistan keep their weapons with them when the defense secretary visits and speaks to them. The Afghans in the tent were not armed to begin with, as is typical.

Later, American officials said that the top commander in Helmand, Maj. Gen. Mark Gurganus, had decided on Tuesday that no one would be armed while Mr. Panetta spoke to them, but the word did not reach those in charge in the tent until shortly before Mr. Panetta was due to arrive.

General Gurganus told reporters later that he wanted a consistent policy for everyone in the tent. “You’ve got one of the most important people in the world in the room,” he said. He insisted that his decision had nothing to do with the shooting on Sunday. “This is not a big deal,” he said.