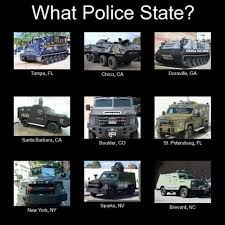 “Never in the civilised world have so many been locked up for so little.”—“Rough Justice in America,” The Economist

Why are we seeing such an uptick in Americans being arrested for such absurd “violations” as letting their kids play at a park unsupervised, collecting rainwater and snow runoff on their own property, growing vegetables in their yard, and holding Bible studies in their living room?

Consider what happened to Nicole Gainey, the Florida mom who was arrested and charged with child neglect for allowing her 7-year-old son to visit a neighborhood playground located a half mile from their house.

For the so-called “crime” of allowing her son to play at the park unsupervised, Gainey was interrogated, arrested and handcuffed in front of her son, and transported to the local jail where she was physically searched, fingerprinted, photographed and held for seven hours and then forced to pay almost $4000 in bond in order to return to her family. Gainey’s family and friends were subsequently questioned by the Dept. of Child Services. Gainey now faces a third-degree criminal felony charge that carries with it a fine of up to $5,000 and 5 years in jail.

This entry was posted in Domestic Enemies, Editorial and tagged Police State. Bookmark the permalink.