“Where Do Nazis Come From, Daddy?” 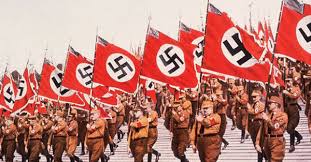 “Well, darling daughter,” he said through a half-regretful smile of remembrance, “it’s like this.”

“A long time ago,” he said, “everyone understood that we can all make mistakes, that no one can be all-knowing, and that it’s a decent person’s responsibility, no matter how strongly he feels about something, to remember that he could be wrong. It was an important piece of a child’s education to learn that no matter how good he is at something, there’s almost certainly someone who’s better at it – and that it’s guaranteed that lots of other people are better than he is at lots of other things. You see, when you know that you could be wrong, you have to admit that other people could be right, so it would always be wrong to try to force someone else to accept your point of view. A young boy or girl who accepted those truths would normally grow up to be courteous to others, even others he thought were really, really wrong about something important.

“Now, not every child really believed and accepted those truths, but so many did, and upheld them so firmly, that the children who didn’t believe them were compelled to act as if they believed them too. No one would let them get away with the kind of behavior that said otherwise. They didn’t like it – no one likes being compelled to hide his feelings – but they went along because the punishment for not going along was so much worse.

From a TV show, many years ago, I caught a blurb that has stayed with me and served me well…

‘Every man is my superior in that I may learn something from him.”

Well, child, from the low-information voters of the 2008 election … where else ?

NAZIS COME FROM THE DEMOCRATIC PROGRESSIVE PARTY ALONG WITH THERE MEDIA WHORE MOUTHPIECES.