Which Country has the Highest Rape Rate in the World? 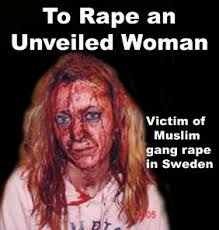 After thinking over the question for five minutes, you might come up with South Africa or some other third world country as your answer.  However, the real answer might shock you.

Who has the highest number of rapes in the world?

The title sadly goes to Sweden, which now sees one out of every four Swedish women being the victim of rape.

Is this the result of the rapid influx of Muslim immigrants who continue to form a larger percentage of the Swedish population?

From the Counter Jihad Report:

This behavior is rationalized as being part of their “culture”. Using culture to justify evil is evil.