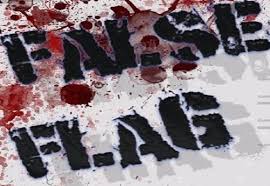 The time for Obama to pull out his false flag and start World War III may be here. The following story details the White House statement that Syria has crossed “Obama’s so-called red line”. It was just last month that the United Nations found that the rebels were the ones using chemical weapons.

Is anyone surprised? The president has been reticent on Benghazi, the IRS scandal, PRISM and Fast & Furious. Which scandal will bring him down? If he can successfully take us into WW III, he will bring the entire country down. Obama is supporting the Muslim Brotherhood and al Qaeda in Syria. Which side should we support? The answer is simple: neither.

Deputy National Security Advisor for Strategic Communications Ben Rhodes said the assessment meant the administration would respond but would do so “on its own timeline.”

“Our intelligence community now has a high confidence assessment that chemical weapons have been used on a small scale by the Assad regime in Syria. The President has said that the use of chemical weapons would change his calculus, and it has.”

It’s On: US “Finds” Chemical Weapon Use Against Syrian Rebels; Proposes No-Fly Zone Over Syria | Zero Hedge « Olduvaiblog: Musings on the coming collapse