Will New York Become the Next Lexington Common? 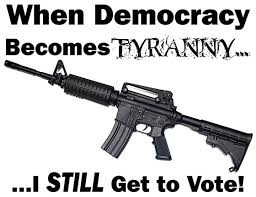 Assault-rifle owners statewide are organizing a mass boycott of Gov. Cuomo’s new law mandating they register their weapons, daring officials to “come and take it away,” The Post has learned.

Gun-range owners and gun-rights advocates are encouraging hundreds of thousands of owners to defy the law, saying it’d be the largest act of civil disobedience in state history.

“I’ve heard from hundreds of people that they’re prepared to defy the law, and that number will be magnified by the thousands, by the tens of thousands, when the registration deadline comes,’’ said Brian Olesen, president of the American Shooters Supply, one of the largest gun dealers in the state.

Some folks in Albany apparently forgot how the American Revolution actually started.

The British decided they would try to learn exactly who had muskets, ball and powder — and intended to confiscate same.  They sent a force to do exactly that, and were met by 70-odd Minutemen at Lexington Common, bearing arms.

The Canadian gun registry was about 25-30%, complete after 17 years of civic disobedience, the new Conservative government decided it was a stupid system, that in 17 years had not solved or prevented one single homicide., Incidentally, the initial costing was to be 2 million, and was still not finished at 2 billion, essentially a 2,000% cost overrun..

Check the smalldeadanimals.com archives for thoughts on the registry. Pretty good commentary, especially the comments.