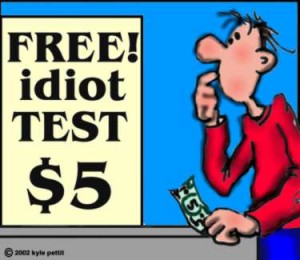 … you have been brainwashed to believe that …

—Bush was better than Obama.
—Clinton was better than Bush.
—A lone nut assassinated JFK.
—There is a difference between the Republican and the Democratic parties.
—A bunch of ragtag Muslims that could not fly a Piper Cub hijacked four airliners and crashed them against the Pentagon and the World Trade Center towers.
—World Trade Center Building 7 collapsed on its own footprint as the result of fires.
—The attacks happened because the U.S. intelligence agencies failed to connect the dots.
—U.S. armed forces are all around the globe protecting you from terrorist attacks at home.
—The same guys who are planning to kill 85 percent of us now want to confiscate your guns to prevent you from killing somebody.
—The so-called “free trade” has benefited the U.S. economy.
—Waterboarding is not torture, but an “enhanced interrogation technique.”
—Getting rid of Obama the puppet and bringing another puppet to the White House and things will get better for you.
—Losing liberties is not a high price to pay in exchange for alleged “security.”

I hope you and Rosie will be very happy together!