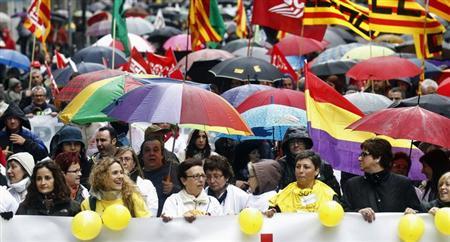 People hold umbrellas as they march with a banner during a protest against government austerity measures in Barcelona April 28, 2013. REUTERS/Albert Gea

(Reuters) – Austerity is having a devastating effect on health in Europe and North America, driving suicide, depression and infectious diseases and reducing access to medicines and care, researchers said on Monday.

Detailing a decade of research, Oxford University political economist David Stuckler and Sanjay Basu, an assistant professor of medicine and an epidemiologist at Stanford University, said their findings show austerity is seriously bad for health.

In a book to be published this week, the researchers say more than 10,000 suicides and up to a million cases of depression have been diagnosed during what they call the “Great Recession” and its accompanying austerity across Europe and North America.

In Greece, moves like cutting HIV prevention budgets have coincided with rates of the AIDS-causing virus rising by more than 200 percent since 2011 – driven in part by increasing drug abuse in the context of a 50 percent youth unemployment rate.

This entry was posted in Editorial, Financial and tagged austerity. Bookmark the permalink.