Borrowing Prosperity From the Future 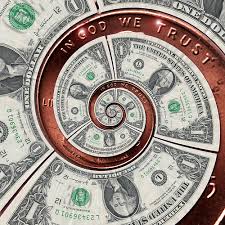 We pay tax in order to have the privilege of currency:

Currency and Credit Derivatives: $616 trillion. Do you understand why gold is up $60/oz. in the past 12 hours?

Bloomberg reports that Bank of America (BAC) has shifted about $22 trillion worth of derivative obligations from Merrill Lynch and the BAC holding company to the FDIC insured retail deposit division. Along with this information came the revelation that the FDIC insured unit was already stuffed with $53 trillion worth of these potentially toxic obligations, making a total of $75 trillion.

Derivatives are highly volatile financial instruments that are occasionally used to hedge risk, but mostly used for speculation. They are bets upon the value of stocks, bonds, mortgages, other loans, currencies, commodities, volatility of financial indexes, and even weather changes. Many big banks, including Bank of America, issue derivatives because, if they are not triggered, they are highly profitable to the issuer, and result in big bonus payments to the executives who administer them. If they are triggered, of course, the obligations fall upon the corporate entity, not the executives involved. Ultimately, by allowing existing gambling bets to remain in insured retail banks, and endorsing the shift of additional bets into the insured retail division, the obligation falls upon the U.S. taxpayers and dollar-denominated savers.

Even if we net out the notional value of the derivatives involved, down to the net potential obligation, the amount is so large that the United States could not hope to pay it off without a major dollar devaluation, if a major contingency actually occurred and a large part of the derivatives were triggered. But, if such an event ever occurs, Bank of America’s derivatives counter-parties will, as usual, be made whole, while the American people suffer. This all has the blessing of the Federal Reserve, which approved the transfer of derivatives from Merrill Lynch to the insured retail unit of BAC before it was done.